Expedition organised by: @GoogleForEdu, @ELewisDigital, media footage by Hannah Walsh, Emily Williams. Photography by Ella Farley and Kainat Hussain with VR help on the day from Computing students Matthew Dove and Danny Roberts. Thanks to students and teachers involved @NHGS. 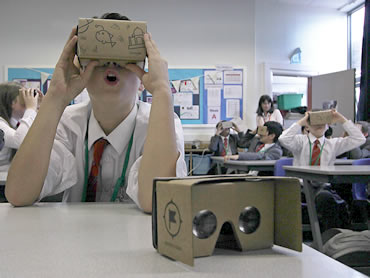 "It was amazing. It helped to visualise things better." 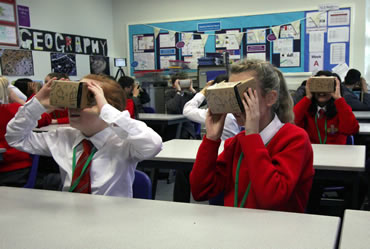 "Fantastic way to show how amazing our world is."

485 students and teachers went to different places in one day. 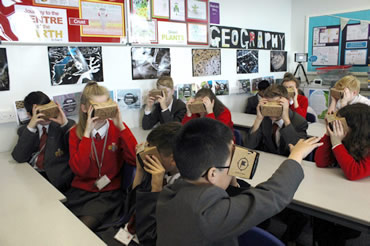 "You felt you could touch your surroundings." 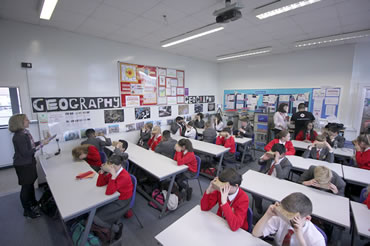 "The teacher used arrows to direct our attention."

Teachers can control the expediton through a tablet. 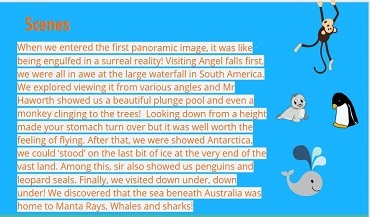 "We saw a monkey clinging to the trees." 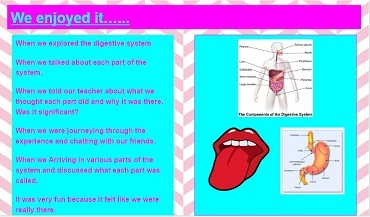 Virtual Reality trips - even inside the human body.

How can you take 485 students and teachers from The North Halifax Grammar School, West Yorkshire, England on an ocean safari, visit the volcanoes of the world, marvel at the Palace of Versailles, fly to Iceland and the Moon, all in one day? Answer: Google Expeditions, a Pioneer Programme from Google for schools.

Google visited the school equipped with a tablet for the teacher, cardboard Virtual Reality viewer and a mobile phone for each student; allowing teachers to each lead an expedition. Expeditions are a collection of virtual reality panoramas - comprising of 3D images and 360° photo spheres - annotated with points of interest and questions controlled via the teacher’s tablet all help to give students a deeper understanding of the world beyond the classroom. As one Year 7 student said: “We like how the expedition leader [teacher] could add arrows to direct our attention to things.” 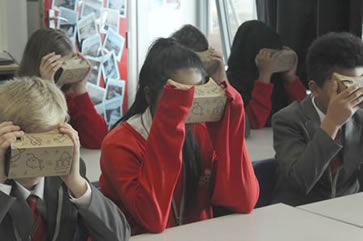 Other places visited during the day were Angel Falls, the New 7 Wonders of the World and Googleplex (Google HQ). Even going inside the human body. Whilst expeditions about Syria and Climate Change enabled teachers to talk about current affairs.

Regarding a virtual trip inside the human digestive system, students in one class said, “We discussed in detail each job that every organ in the digestive system has. This expanded our knowledge because we got to experience the inside of our body and the process our food goes through when we digest it.” Although they learnt a lot from it, some found it “quite disgusting,” prompting some students suggest that Google should do a trip about the effects of smoking, with pictures of the inside of the body of a smoker and an non-smoker.

Integrating an expedition into a lesson was modelled by one teacher who took his students on a trip to the Palace of Versailles, France. There the students were able to explore a part of the Palace and draw it in their Drawing books, before moving onto another part of the Palace. Perhaps the greatest feature of the VR experience being able to comprehend perspective, as many students commented on the size of the bed in the King’s Chamber (commenting that they wished their bed was as big). Being able to have a 360° look round made them feel as though they could just reach out and touch the objects. 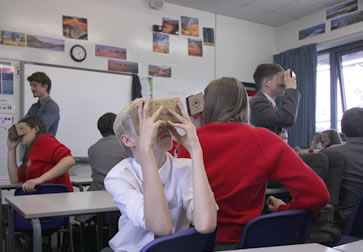 As for the teachers, they thought that they would use it again, especially in Geography - although they said it would be useful in other subjects. They liked the fact that students seemed to be engaged in the experience and how the visual imagery helped the teacher in explaining and describing topics, such as in PE where they were able to look inside a bone. Teachers agreed that any expedition needed to be incorporated into a solid lesson plan to deliver the most benefit.

93% of students surveyed said they enjoyed it and 88% thought that they got more out of the lesson seeing a place in 3D than reading a book or watching a video. The only negative comments were that some had feelings of motion sickness, but the expeditions can be split into shorter sections to minimise any adverse effects. Perhaps (as one teacher suggested) having the students find the answer to questions via the VR, then transferring that answer to a worksheet or diagram would help to give active eyes a rest. However, the expedition aims to be all-inclusive, and if a student feels the need, they can remove the cardboard viewer and experience a 2D version on a mobile phone or tablet.

A Level Computing Students Danny Roberts and Matthew Dove were involved in helping the teachers and students during the day. Matthew reflects: “"Google Expeditions was very interesting, all the staff and students were excited to use it for everything from Art to Geography and it was a good topic starter for any lesson.” Media and Photography students Emily Williams and Hannah Welch filmed the day with Ella Farley and Kainat Hussain providing the photography. These are all available to view on a website, which the school has produced: http://www.nhgs.co.uk/googleexpeditions

Mr Bowles an RE teacher who took his students on an expedition said: “You are transported...into another world. It is a magical experience for students, but needs careful structuring to make sure it's relevant and well-planned.” 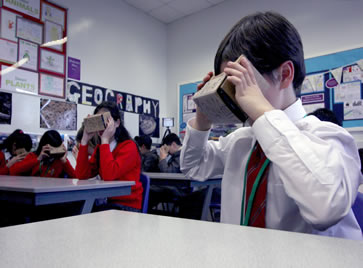 Whilst nothing replaces hopping on the bus for a field trip,...as one student said, “it’s cheaper than buying a plane ticket.” The experience certainly got the students thinking about what else they’d like to see. One said that they’d like to see “..a 360° view of all 721+ Pokemon in a room”, whilst another thought that “Google should send an astronaut into space and make a 360° view of space,”... maybe that astronaut might be one of these students, certainly one of the most special moments of the whole event was when an entire class of Year 7 students gasped in amazement upon visiting the moon only to realise that ‘their’ shadow on the moon’s surface was Neil Armstrong’s.

The verdict: In a well-planned and structured lesson, Google Expeditions helps to make teaching and learning stimulating, active and effective.